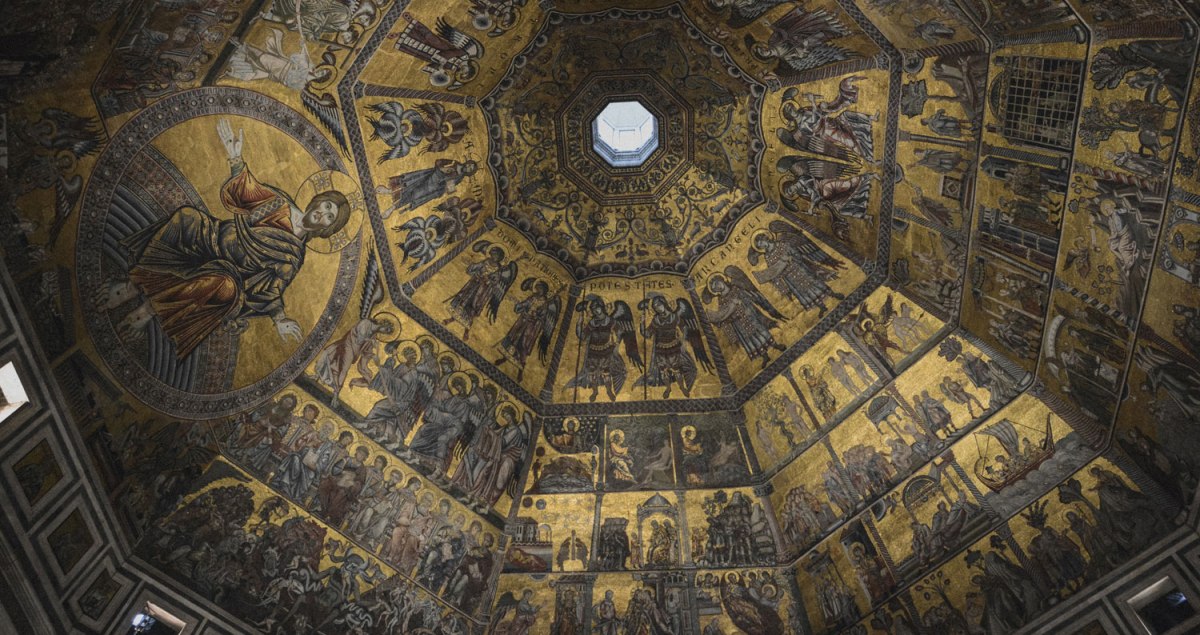 As a disclaimer: These photos were taken during a visit in January 2016, so this post may not be representative of this site today.

Located directly beside the Duomo (don’t believe Assassin’s Creed II), the Baptistery of Saint John is one of the oldest buildings in Florence. Originally built between 1059-1128, the baptistery had, as it did across Italy, an important part to play in Florentine society, as undergoing the holy rite of baptism was a point of entry into it, and it was at that moment that one truly became a citizen of the city. Many important Florentine figures, including Dante Alighieri and members of the Medici family, were baptized in this building.

The building is particularly renown for its three doors (replaced by copies, and their originals today housed inside the Museo dell’Opera del Duomo). The south doors are the design work of Andrea Pisano, and the bronze-casting and gilding work of Leonardo d’Avanzo. They were originally placed on the east side, facing the Duomo itself, and were moved to their present location in 1452. It took six years (1330-1336) to complete its twenty-eight quatrefoil panels, the top twenty of which depict scenes from the life of Saint John the Baptist. The remaining panels show images of the eight virtues (hope, faith, charity, humility, fortitude, temperance, justice, and prudence). The door frame, with its own molded reliefs, was added by Lorenzo Ghiberti.

A second set of doors (not pictured) were the result of a competition, this time held by the Arte di Calimala (Cloth Importers Guild) in 1401. Ghiberti and Brunelleschi were the finalists (a repeat of what took place later when commissioning the dome of the cathedral), and though the judges could not decide and wished for both to work together, Brunelleschi’s pride got in the way and he left Florence instead, travelling to Rome to study architecture. It took Ghiberti 21 years to complete the commission, which replaced Pisano’s doors as the east doors, while the latter were moved to the south side of the baptistery.

In 1424, Ghiberti received a second commission, this time for a set of doors that would eventually be dubbed “The Gates of Paradise” by Michelangelo, coining the moniker by which they would be known forevermore. This time, it took him and his workshop 27 years to complete the set of doors, with ten panels depicting scenes from the Old Testament. His older work was moved to the north side of the building, and the Gates of Paradise, to this day, sit on the eastern side of it (or their copy, at least).

The present baptistery replaced a Romanesque building dating back to the fourth century, itself having been build atop Roman ruins. It was consecrated in 1059, though its construction was not completed until 1128.

Now, remember that Brunelleschi had wanted the dome of the cathedral to be covered in golden mosaics? Guess where he took his inspiration from?


This exquisite ceiling was completed over the course of a century in different phases, beginning in about 1225, and created by the Franciscan friar Jacobus, who was trained in Venice and strongly influenced by the mosaic tradition of the Byzantine period.

Besides the Christ in the main image of The Last Judgment, the ceiling shows stories from the Book of Genesis, stories of Joseph, Mary, and Christ, and of Saint John the Baptist. The designs are credited to painters Coppo di Marcovaldo, Corso di Buono, and Cimabue.